On July 15, 1904 a group of stagehands from the oil boom town of Oklahoma City in the Indian Territories, signed an agreement to become a member of IATSE (International Alliance of Theatrical Stage Employees) known then as Local 112. Members more commonly refer to the organization as “The IA” which has become largely symbolic rather than descriptive of the full scope of IA’s wide-ranging activities. 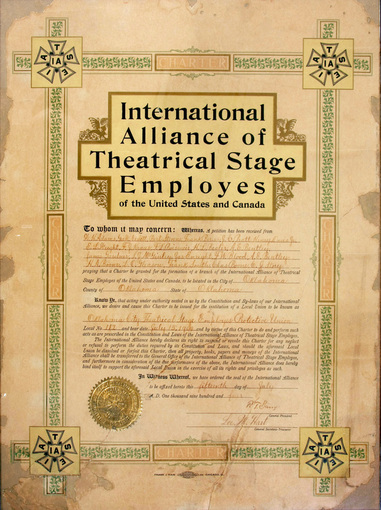 At that time show business was confined to Theater and Music Halls. During that period a property man or stage carpenter could make about $35.00 per week and his assistant about $20.00 per week. It was the expansion of the railroad system in the early 20th century which made traveling shows grow in scope and scale. Rail cars made it possible to transport larger pieces of scenery and props. These larger shows helped develop the division and specialization of the varied theater crafts. In 1907, Oklahoma became a state and IA Local 112 was growing along with it.

In 1935, Local 112’s membership began to soar because of an agreement between IATSE INTL. and IBEW (International Brotherhood of Electrical Workers). This gave IATSE jurisdiction over temporary electrical installations.   In the late 30’s, 40’s and 50’s IATSE INTL. was plagued with problems which were nationwide.  Oklahoma was not affected as badly because of their location in the middle of the US.
In addition IATSE Local 112 became more productive after the building of Oklahoma City's
CIVIC CENTER MUSIC HALL in 1937. Through the we years it has had some magnificent shows.

There were also to two other arenas constructed in the Oklahoma City Metro. The first was the “MYRAID EVENT CENTER” which was opened November 5, 1972, and later became the
“COX CONVENTION CENTER”. Over the years it has had some of the biggest names in the music business and Local 112 has done them all.

The second arena built was "THE FORD CENTER” which opened on June 8, 2002 as part of a MAPS project to bring a professional hockey or basketball team to Oklahoma City. It was renamed the “CHESAPEAKE ENERGY ARENA” on July 22, 2011. In 2005 a hurricane hit the City of New Orleans and Oklahoma City was lucky enough to offer a temporary home to the NBA’s New Orleans Hornets. Local 112 and Oklahoma City fell in love with professional basketball, and while they were here we showed the NBA and the nation we were ready for our own team. We got our chance when a group of investors bought the Seattle Supersonics and moved them to Oklahoma City. Thus the “OKLAHOMA CITY THUNDER’ was born and we have thrived with them. In 2012 we hosted the NBA Finals at the CHESAPEAKE ENERGY ARENA and are looking forward to the 2013 season. 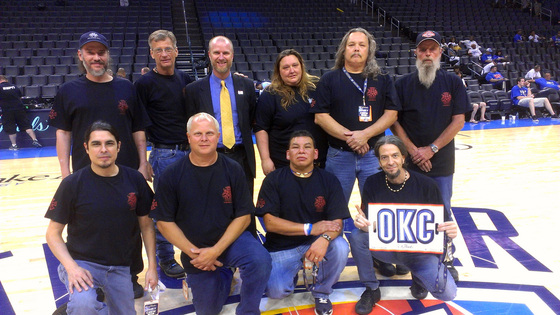 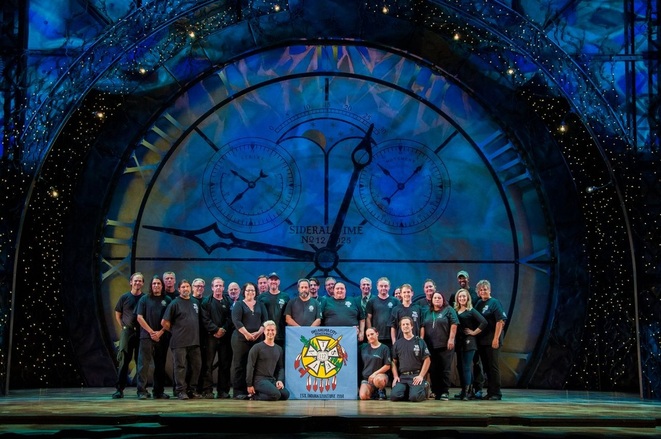 IATSE Local 112 wants to give special thank you to Wicked Broadway Tour and Celebrity Attractions as we celebrates 30th Anniversary of Broadway in Oklahoma City!  Photo by Anthony Risi. 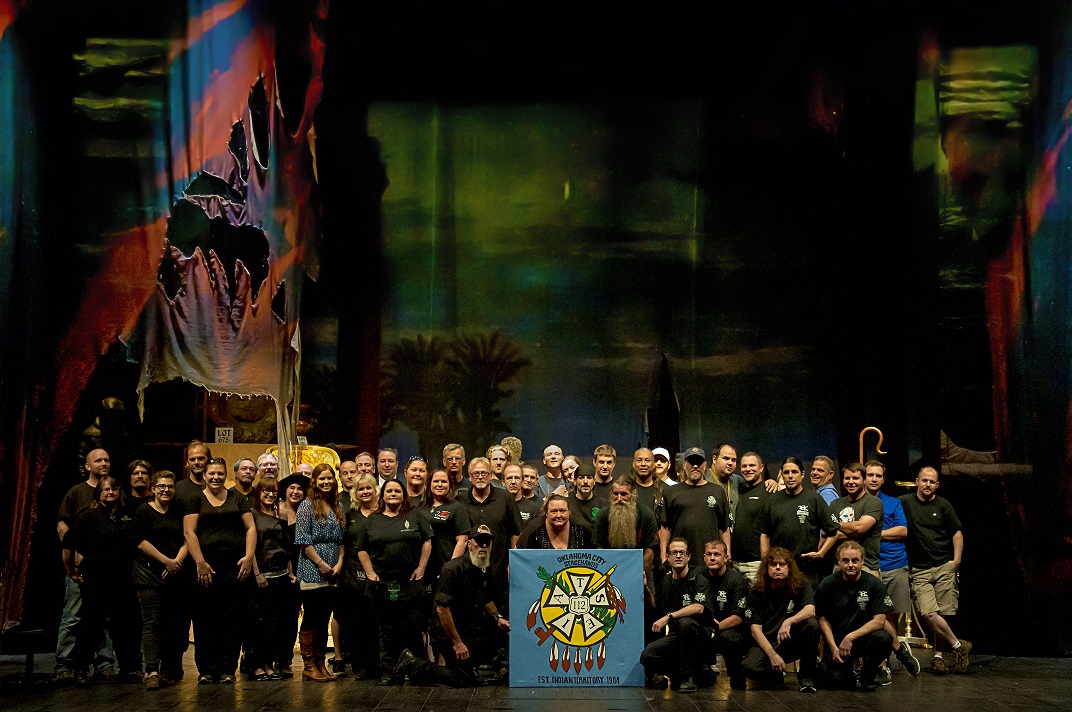 IATSE 112 Stagehand Union wants to give a special thank you to Celebrity Attractions, Phantom of the Opera Broadway local and touring crew fall 2014. Photo by Anthony Risi.
We were so proud of Carlos Santana, to represent IASTE Bug Local 112 t-shirt on the OKC, OK Civic Center Stage for his performance on March 17, 2015.
IATSE Local 112 was honored to serve President Barack Obama in Durant, OK, Wednesday July 15th, 2015. Obama was here visiting Durant High School speaking to the Choctaw Nation of Oklahoma.